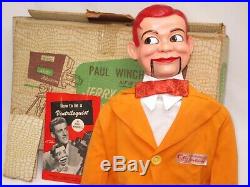 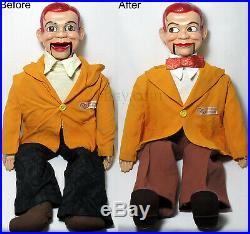 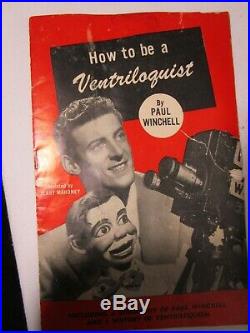 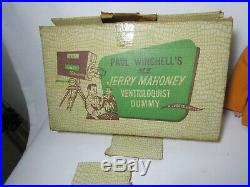 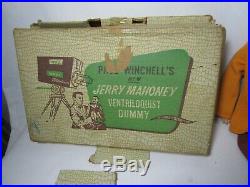 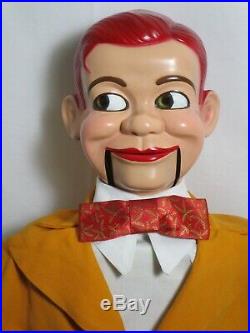 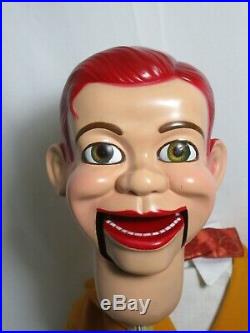 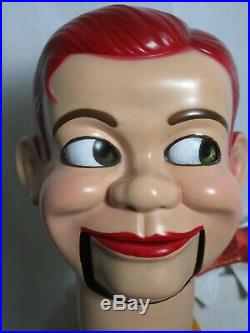 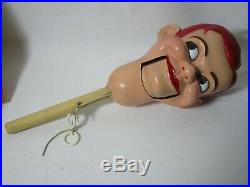 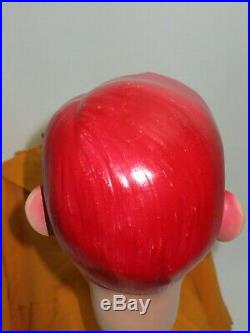 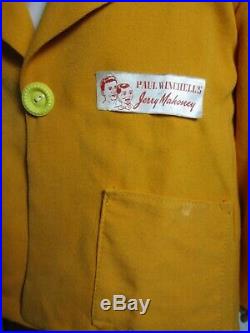 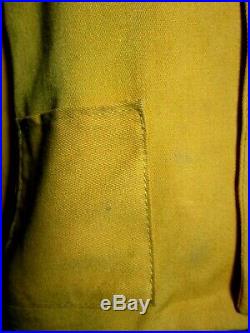 Date of creation: 1959 or 1960. This Jerry has been partially restored. All the parts are original except for the shoes.

Touch up work was done on: the back of the jaw, the teeth, the bottom of the top lip, the front of the bottom lip, the front and top of the hair, the top (and partially the bottom) of the eyeliner, and the whites of the eyeballs which suffered heavy paint job damage due to a botched repair attempt where someone attached a spring to the seized eye mechanism, resulting in not just paint, but plastic being scraped off. The original eye shadow had to be completely removed due to being mostly ruined by some kind of marker. The rest of the paint job is all original. The head was completely disassembled and washed inside and out due to some kind of oil being present that was attracting dust and filth.

I think someone tried lubricating the eye mechanism by literally dumping oil on it or something. The entire eye mechanism was also taken out and cleaned. There are still remnants of this oil inside of the head that didn't come off because it solidified long ago. The wooden control post and metal eyehook mounted into it were also cleaned. The original clothes are in good condition with only very slight fading, there are a few imperfections that are shown in the pictures.

The original pamphlet is fairly worn and has a staple in it. The original box is missing the handles and two flaps have become detached.

There is also modern tape on sections of it. This is a fairly early moving eyes Jerry, the plastic button sewn into the suit you seen was given to the earliest moving eyes Jerrys, indicating it was made in either 1959 or 1960. This Jerry's mechanics have been adjusted to compensate for deformation, and now work perfectly and are not under any stress. (For context, all Jerrys made from 1958 to 1966 were made of plastic less capable of retaining their original shape over time, finding one that has still retained 90% of its original shape is nearly impossible nowadays).

The item "Moving eyes JERRY MAHONEY Ventriloquist dummy puppet figure doll Paul Winchell" is in sale since Friday, March 27, 2020. This item is in the category "Toys & Hobbies\Vintage & Antique Toys\Character". The seller is "jerry_mahoney" and is located in Highland Mills, New York. This item can be shipped to United States.